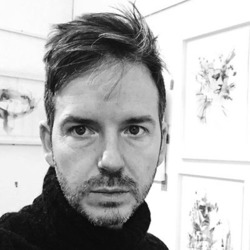 I’m fascinated by the flow of line and the ‘invisible lines’ that connect us to the natural world.

It was Anne, of the Art Traffik Team, who first introduced me to Carne’s work and his universe. While traveling in Cambodia, she visited the TRIBE Cambodia gallery in Siem Reap, which so happens to represent another one of our artists, Fin DAC. She discovered Carne Griffiths’ artworks and fell in love with them. She even purchased one for her own personal collection, and showed it to me upon her return to France. I instantly fell in love with his work too…a few emails and a phone conversation later, Carne graciously accepted to enter our selection. Today, we are especially pleased to present him to you and to share with you his artworks, the product of his universe…

I will not detail his career path…Originally from Liverpool, he graduated from the Kent Institute of Art and Design in Maidstone in 1995 before moving to London where he learned embroidery design in the world’s oldest gold thread embroidery company. He worked there for 12 years before becoming its Creative Director. In addition to works for theaters, fashion and advertising, his creations were also used in the film industry for costumes in movies such as Valkyrie, The Last King of Scotland, and in particular “Red Death’s” coat in the Phantom of the Opera, his specialty being floral motifs. In parallel, he has always drawn. He is one of those artists for whom drawing pencils have always been a VITAL life accessory. Until one day, in 2007, he left embroidery design and decided to devote himself entirely to his creations, his drawings. The uniqueness of his artworks allowed him to quickly exhibit in galleries and earned him the recognition of art dealers and art lovers alike.

Let’s begin with his unique technique…You’ll find numerous news articles and interviews of Carne that focus on his technique because his artworks have the striking feature of being composed of edible liquids (in addition to pencil, ink and paint) such as spirits (brandy whisky or vodka) which he used for a very long time, but now uses mainly tea. The fruit of these mediums, in addition to the “streaks”, is a nature-drenched color palette whose shades blend together. “Alcohol has a curious effect on ink, taking the color deep into the paper very quickly – it behaves very differently to water and gives permanence to some inks.” Colors to which his pencil strokes intertwine – dynamic, spontaneous, rich and intense…Strokes which Carne refers to as writing, but more specifically as “automatic” writing. For his artworks spring from a state of awareness. Not in the methodical sense of the word, although his artworks have the detailed precision and finesse of embroidery, but in the sense that Carne is connected to his emotions, his instinct, and to his secular spirituality, a bond with the Universal.

His favorite and practically sole theme, with only a few exceptions : portraits of women…Beautiful, enchanting, fascinating even… “The women are a blend of reference and imagination. I have worked with photographer’s images that capture a sense of other worldliness where I feel an image stops you in your tracks – that’s what I want my work to do and then to bring out or to add a sense of mystery anticipation, or seductive quality, I draw from life too. It is essential to develop and maintain your drawing but I do not have a muse…”. Nonetheless, Carne’s universe goes beyond these faces…there is a dreamlike atmosphere, fantastical even, but nature, naturality, and his “invisible lines” being the main theme. The faces seem to emerge from a very dense flora, becoming One, linked by the pencil stroke and blending with naturality. Therein lies Carne’s talent and the potency of his artworks : his ability, with his strokes and colors, to create a perfect union - aesthetic, lively and vibrant. With the contemplation of each artwork’s entirety, Carne delivers an emotional and aesthetical impact. But, when we look further into his strokes, curves and colors it then becomes an exploration, a journey guided by his lines where we uncover all the magic of his artworks. To that extent, I invite you to view one or all of the videos below in which the 3D animation of his artworks allows us to enter his realm and discover the full scope of the journey they offer.

“ We are all connected emotionally or spiritually to what is around us, whether it is people, animals, nature or inanimate objects…I see these connections, (not literally) as lines between objects, between the things we are made of, like contours. They represent lots of different things, including energy, emotions or spiritual connections and basically anything that we don’t really understand.”

With his stroke, he draws and brings color to these “invisible (but universal) lines”, and brings them to life, with meticulous detail, energy and creative spontaneity. Carne’s artworks go beyond portraits because of the intensity, might and beauty he instills in them. The true theme is this natural and universal “bond”. His talent lies in his ability to harmoniously sublimate this bond, by means of his strokes, colors, characters and…singularity.

We are extremely delighted to present to you his unique and original artworks (whose prices are on the rise), but also his limited edition prints (signed and numbered), at more accessible prices, which reflect Carne’s spirit of sharing and will to make Art more accessible.

A warm welcome to Carne Griffiths, within our Master selection of course, and a pleasant discovery to you ! 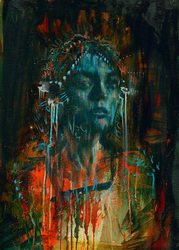 All artworks by Carne Griffiths