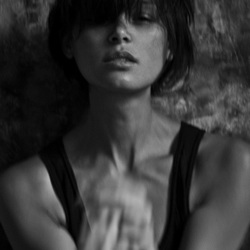 Art is like a dream. It is the most beautiful journey in our lives. It is the wedlock of heaven and earth.

At Art Traffik, we love the sincerity, intensity and emotion that emanate from our artists…Marina Ho happens to be a concentrate of all those qualities, we are therefore extremely pleased to present her to you…and to have her enter our selection !

Marina is « inhabited » by drawing… “It’s simple, I was born with it…and my primary mean of expressing myself was through drawing, even before speaking”, she tells us.  To the point that, when she was a child, it worried her parents and teachers. She would even draw while walking or going down stairs, and even isolating herself, like in a bubble, from her surroundings…Autism was even considered.

But, at the age of 12, her parents separated, and was the emotional shock that made her put away her pencils. “Daydreaming and her world of drawing came tumbling down, overtaken by a harsh reality. At that moment, the child in me was broken, shattered. Overnight, I stopped drawing, completely, and I fell into a state of denial, amnesia of drawing.”

When she turned 18 she was ready to leave her father’s home, and started a successful modeling career. “A superficial world so out of touch with the true me, in which humans are objects to be seen and only appearances matter.” She goes on to be successful though, and it brought her material prosperity : the purchase of her home. Day in, day out, she presses forward, all the while alienating herself.

At 28, a friendly (and intense) encounter with an artist, progressively led Marina back to dreams, emotions and truth. Pandora’s box reopened, and without being able to explain how, she started drawing again. “It was disastrous ! I was drawing like a 5 year-old child; I had start from scratch, by doing automatic drawings (Author’s note : a totally spontaneous drawing, guided by a moment and emotion)”. Drawing once again plays a compulsive role in Marina’s life…she says it was “an extraordinary and marvelous awakening”. A revival of hope, in life, and in herself and mankind. Like a rebirth, she found herself again and reconnected with the expressions of her soul she had silenced during many years. Everything resurfaced, starting with the pureness and sincerity that the automatic drawings rekindled. From that point, and with the same strength of conviction of a child determined to become a pilote, Marina decided she wanted to be an artist, “I want to become an artist”.

Encouraged by her friend, she bought all the needed sketching materials, and her desire to live her passion (and to perfect) once again became addictive and compulsive…Juggling with her modeling career, all her spare time is devoted to her art. But it isn’t enough. She needs a place in which she can feel free and detached from her professional obligations, in order to let live the artist in her. So, she bought a workshop. But it still isn’t enough…In 2017, when she turned 38, she decided to end her modeling career, and spent her savings in order to fully embrace her creativity. She makes this decision having only sold just a few artworks, but after having weighed all the risks. From there, she had no other choice, she had to succeed…”It is was my life’s meaning, my soul’s essence…I wanted to earn the FREEDOM to Be”. Without safety nets or help (not knowing anyone in this industry). Then, it all started happening quickly…

She worked and worked and worked, and threw out a lot…First her technical progression, along with the sectioning of everything that was polluting her pureness and sincerity, freed her, and allowed her to go deeper into her emotions and to relay them in her artworks.

She progressed fast, slaving away, and her first exhibit came to be, which was a success. Not only did she now have recognition by being exposed in a gallery, but her artworks all sold out…then she was selected by a second, third, fourth gallery; up to 6, today…in France, of course, but also in Brussels, Asia…

Marina only needed to be fully devoted, to find herself and her youth’s genuineness, in order for her creations to have the very same sincerity, strength, intensity and Beauty…they are the essence of her artworks : purity of emotions. With the regained sensitivity and a mastered technic, she creates artworks that are the fruit of the bond she has with others, with mankind.

For, it is mankind that inspires her and which she explores, and whose Truths she tries to capture; the whisper of the bond that connects us all. “I am fascinated by Man, feelings, emotions, their life experiences, and by Life itself, what we do with it and what it does with us, our bodies and souls. A drawing is an image of our Lives”.

Her artworks are the fruit of her relationship with others…and her search for the emotional, human truth.

Two people who meet and tell each other’s story become emotionally connected. The emotions of one touching and impregnating the other, and vice versa. Like a physical, yet emotional, echoing. A transient echoing at a given moment, in a place somewhere. It is these “places” she looks for, that inspire her and generate these portraits. “The place is an emotion”; linked, both hers and someone else’s. A mixture of the artist’s ultra-sensitivity and the introspection of her feelings. Each portrait is as much the emotional illustration of an encounter as it is the inspiration, a breath of air, the artist’s feelings; an artistic catharsis of the emotion felt, at a given place and time, and with a certain Being.

Like with any feeling, her sensation and interpretation are formed of nuances.

Like with any representation (genuine and sincere) of someone and of his or her soul, with all their uncertainties, the contours are hazed.

Like with any introspection, the lighting is that of a candle in the dark, fragile and subdued.

Like all things sincere, they are pure, unvarnished and without cosmetics, therefore, colorless. “Color is like a woman’s lipstick; it’s a façade. But I am not about seduction nor am I looking to seduce, for seduction always entails lying”.

In the sfumato, in the emotional and technical (mastered by the artist) sense of the term, a part of mystery and questioning linger. It triggers the emotion of its onlooker, and he or she potentially will identify with it, for it inevitably calls upon our own emotions, reflecting them as would a mirror, a projection of our intimacy. That’s when the quintessence of Marina’s artworks can be savored, and when the magic happens; when they lure you and pull you in. Because of the emotional alchemy between the artist’s emotions, those of the Being sketched or painted, and of those contemplating the artwork.

Marina’s intention is to pursue her artistic and humanistic exploration, her artworks being the fruit of that exploration. And, with always the same determination to work, draw, to be bewildered and to surprise us, and…to always improve. Without a doubt, Marina is to be followed closely, artistically, and also her success on the market… 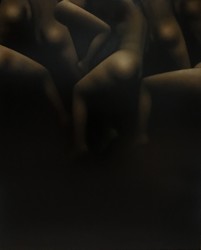 All artworks by Marina Ho