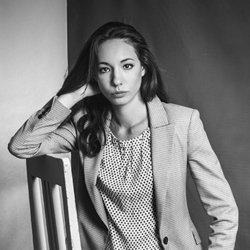 I love recomposing reality with acerbic irony and realistic mockery. Aesthetics are merely the medium at the service of what I explore through photography and what I wish to share.

Because of the disruption within the fine art photography market caused by an overly abundant supply, we are very selective of the artists we choose. Today, anyone can take a pretty picture. But when a sharp and distinct DNA is identifable in the pictures of an artist, with seamless coherence and quality throughout his or her work, to which there is also that little extra soul and/or meaning that make all the difference, then there is no hesitating….the same way we did not hesitate in having Marine Foissey, young photographer, enter our selection.

Indeed, she and her artworks, organized in series, all possess these qualities. Each of her pictures, taken individually and as a whole, contain meaning, emotion, aesthecism and her artistic identity…under one central theme : Time, unconditional and universal. « It irretrievably elpases, both at an individual scale and the vaster human scale. ». Around this theme, she questions the idea of deadlines (including death) and what we do, whether consciously or unconsciously, with this precious time driven by consumerism, to the detriment of the animal kingdom, to name one…what is our rapport with Time…

From these personal observations stem emotions. The most prominent and strongest of these emotions gives way to the desire and the thought and concept of a series. Marine Foissey darkens the pages of her notebooks with words, phrases, drawings and sketches that will result in a final image, a photographical composition that will make up a series : stepping into her studio to freezeframe the result of a thought process. Marine’s creation and its making constitute the catharsis of her own emotions. But the result is thought out with the intention of sharing with us her emotional and intellectual projection in order to confront us with a firm intention : to raise our awareness; make us reconnect, see, learn and try to understand Time, life and all that we hold dear. Some series represent a sort of exorcism of Time as it sheds away inexorably while others represent the opposition to what Man imposes on the world with the way He uses his time. “Time, death, loss, our mortal condition and deviances, and their consequences on Life and Time, are my subjects…”

From a very young age, Marine was attuned to culture and influenced by art.

Her parents made every vacation an opportunity to nurture themselves and Marine of Culture and Art. Between museums, exhibits, historical sites…every country discovered was an initiatory journey which contributed in developping Marine’s sensitivity to all that Art had to offer.

Photography was also an integral part of her childhood. Early on, she was given an analog camera which she used on vacations and trips. Her vision, her eyes and her emotions began taking shape…

After having obtained a baccalaureate in Literature and Art, followed by two months studying art history at the Sorbonne (which bored her), came a year she qualifies as “wanderment”, with days spent visting museums and art exhibits. She then had the idea, ludicrous at the time, to take up photography. “Well, why not ?”. Two weeks later, she successfully passed the Icart Photo School entrance exam. After two very academic years, that were neither fascinating nor exciting, came the practice of knowledge, the freedom to create…with the particular goal given to each student to create a graduate photo book. Having chosen a subject and a personal approach, she began exploring her creativity and her emotions, the first serving the latter and vice versa. Marine became passionate, engaged, and the artist in her revealed itself to her peers. Her book won 4th place and earnt her diploma.

Marine then submitted her book in order to be part of a photography festival. She was granted her slot, whereupon she discovered the pleasure of staging as she hung up her artworks, sublimating the aesthetics, of course, but also to better share their meaning and signifigance. She went on to enter festival after festival, creating new series every time. Ten years and 9 series later (with just as many festivals and competitions), photography became her medium of choice, her passion. Festivals allowed her sell her artworks and be able to “exchange” with people, creating strong and more direct bonds with those who acquired and were moved by her work.

But, let us go back to her artworks…Marine does not try to do “pretty” but rather she exploits the aesthetics for the purpose of her emotions and the meaning she wishes to share. Each artwork, each series is an alchemical and narrative allegory. Marine speaks to me of “midwifery”. « When I find myself with an emotion which I need to understand – for we best accept what we fully understand – I am compelled to be alone until the series is complete. I take all my pictures alone, even in my studio, regardless of the technical difficulties I may encounter, even if this means setting up a giant aquarium in my apartment like I did for the ‘Après moi le déluge’ series.” Behind many of her photographs lies a technical performance; a sort of challenge, a will, when faced alone with her artistic development. “If someone had filmed me while I was taking my pictures there would be some funny videos (laughs).” However, Marine admits that “each series is an ongoing battle with uncertainty, but it is that uncertainty that pushes me to dig further into myself and into what I wish to create.”

The fruit of her work are her series, together with an accompanying text which is the final creative step. Each series is composed of “acerbic irony and realistic mockery”, as she likes to put it, but with beauty and meaning. Now that I have given you some pointers, it is time for me to leave you to discover her artworks and to appreciate their sincerity, meaning, emotions and aesthetics; to grasp the DNA I mentioned earlier, the reason we are proud to share this artistic discovery with you. And, who knows, perhaps you’ll even be as impatient as we are to uncover the new series to come…as part of the “Art Traffik Certified” selection, she will no doubt evolve and will soon enter the “Master” selection.

All artworks by Marine Foissey