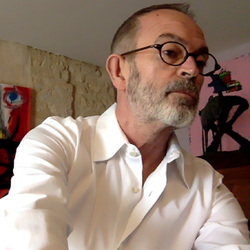 Knowing how to paint or having a certain technic doesn’t suffice to make Art ; one must have a story to tell, with a sincere emotional charge.

Granted, we all have our share of creativity, an artist within us…to a certain extent. And, we are all, more or less, aware of it and, more or less, allow it to express itself. But, when it is “present” and we do not let it express or carry itself out, nor do we find the medium that allows its release, it will persist and press on, often leading to discontent, turmoil even. So it goes for RROY (R for Roland) and his evolution, until the epiphany of what painting truly meant to him.

Indeed, it took many years, a journey we could qualify as initiatory, for Roland ROY to find in painting the artistic outlet for what was bubbling inside of him.

As an adolescent til the time he began working (in a field very distant from art…), he devoted his time to music. He started playing the guitare and created a music group, touring and performing, all the while exploring other instruments. In parallel, he toyed with photography, portraits, taking pictures « of people”.  These, too, were quite successful. With music and photography, RROY experienced the pleasure that came with these artistic activities and felt the need for it. Still, he recalls : “it was my breath of fresh air, essential; it was a part of me. I toyed with different musical instruments and with photography, like challenges, with the aim to succeed and to find MY medium. But none fully satisfied me; not the way painting does today.”

But then, he entered the working life, as a consultant, with all the methodology and “seriousness” it required. He set aside his instruments and his camera. However, in 2010, at the age of 45, his profound artistic desires and need to create resurfaced; at a time when professional weariness and routine lead him to yearn for that artistic, creative oxygen again. Once more, he took up photography, but wanted to take it a step further; “simple” photography didn’t suffice anymore. So, with always the same success, he began projecting his pictures on models to bring another dimension to his creations, to his creativity; editing them on his computer to make them more “perturbed and rhythmic”. Quickly, under the alias URBAN TAG, he began exhibiting in galleries and making his first sales; exhibitions in Paris, London, Brussels, Beijing, NYC…

Yet again, and in his own words : “ I was bored; it was too simple, too easy.” So, he decided to try himself at painting…”For me, painting is and always will be the most sophisticated level of Art, the most complicated, the ultimate. It was a new challenge which I approached with great humility, especially when I saw my first canvasses (laughs)”. Nonetheless, it’s an EPIPHANY, having found the medium that offered freedom, oxygen, spontaneity and emotion in their purest forms…even more so when he switched from acrylic to oil paints, subduing him with even more pleasure and possibilities.

In this medium, he was able to find the rhythm he loved so much in music, the gestures and the colors being like notes he looked to harmonize. He can also, more freely still, create those “perturbances” he had created with his photography, with which he particularly likes to toy. One element hasn’t changed : human beings, people are his subjects. “I love people because every one is different, no two are alike. Everyone is unique just like every artwork is unique. These characters are the fruit of my imagination, free and quirky, outside standard codes…All that I am not in my professional life, and which allow me to exist”: the source of his paintings with their spontaneous and loose gestures. However, each artwork is the fruit of a maturation…the first draft, stemming from the white canvas, is never good enough. Roland finds them “too slick”, not perturbed enough. Therefore, he covers them up with a second creation, feeding off the first one, the latter being his guide, instinctively influencing his strokes. “The first one is always created with the intention of making it definitive. When finished, I look at it, and the more I look at it, the less I find it accomplished, so I set it aside. Then, one day, I’ll go back to it and will allow myself to destroy it be covering it up, all the while being inspired by it. Only when I degrade it, perturbe it and make it vibrate, do I begin to let loose and dig deeper within myself.” At times, he even covers it up a second time, the third “layer” being most satisfying to him, in every sense of the word, including repletion : when his emotions are completely and faithfully projected; the end result stirring him as well. It isn’t surprising he dropped his alias URBAN TAG to sign his artworks with his real name…

For a long time, this remained his secret garden. He has remained humble in regards to his creations and his artistic appreciation. How could he pretend to be a painter when this art form belongs to the great masters, three of which have always moved and impressed him ? Picasso, Gustav Klimt, and last be not least, JM Basquiat. “They are always in the back of my mind.” Three masters he admires, each for their individual complexities and poetry, and whose rhythm, in the musical sense of the word, moves him. According to RROY : « Knowing how to paint or having a certain technic doesn’t suffice to make Art ; one must have a story to tell, with a sincere emotional charge. »

The end result are these characters with the strokes and style of « Bad Painting ». « I want to preserve this naviete because it comforts me : I’m glad I don’t know how to draw. It’s liberating ; I hate « squares » ! ». His first « groom » characters came to be, inspired by one of Chaim Soutine’s artworks, copy of which has accompanied him over the years. Eventhough this remains his favorite subject, which he continues to explore, RROY quickly began expanding his vision of human beings, people in general, but always guided by his feelings, imagination and present desires (like his choice of colors).

We will never say it enough :  bad painting, bordering that of art brut, as is the case with RROY, becomes Art when it is sincere, and the projection of the artist’s emotions and soul is pure; it brings identity, a DNA. And, when emotions create aesthetics, artworks will set themselves apart, and Art then merits an upper case. RROY’s artworks are part of such, and the more he creates and evolves, the more powerful and accurate he becomes.

You’ll have guessed it : an artist to be followed closely, for just as it was for his photography, he will undoubtedly be successful, earning the recognition of galleries and collectors alike ! 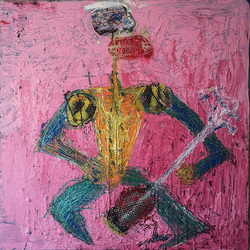