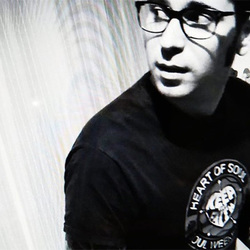 To paint, to communicate and express oneself becomes vital when the blackness of the paint tubes, alone, allows us to imagine the colors of life. Painting takes hold of me and guides my movements, instinctively, for I do not paint; I am the painting.

Adrien Goudier is one of those artists who ignore that they are (or who are in denial because of humility and modesty), but who come to reveal themselves; artists that life reveals and which enables the emergence of what inhabits them. And what a revelation !

The artist, his artworks and his artistic identity (as it is expressed today) are the fruit of the fertile soil from which he has sprouted and grown, and has since blossomed. Drawing has always been a part of him, but it will have taken a life journey, marked by founding milestones, for Adrien to finally decide to devote himself to it entirely.

His unique theme : male portraits. His uniqueness : his stroke…

I mentioned “fertile soil” : “I was blessed with parents that immersed me in art, among art exhibits, music and literature. Every Sunday afternoon, our ritual was to go visit a museum, a fair or an art show.” Ritual and « sustenance » thanks to which, at the age of 9, Adrien discovered Bernard Buffet. First, in the form of a quote that marked him for life “painting shouldn’t be talked about or analysed, it should be felt”; Then, upon discovering his artworks. Adrien was so impressed by Buffet’s work that he says it felt like a “slap in the face”, “magnetism”; one in particular moved him : “Tete de clown” from the “Le Cirque” series.

All throughout his childhood, Adrien drew and drew and drew, or “scribbled” as he puts it, but always portraits. He kept some and discarded others. His art teacher spotted him out and even went as far as to incite his parents to encourage him to pursue an artistic career…but, they decided it was “best” for him to concentrate on a more “secure” profession.

I also mentioned a life journey…Adrien speaks of highs and lows, and his first life period he qualifies as “borderline and rock n’ roll”. He recalls being sommelier at the Fouquet’s and serving Pierre Cornet de Saint Cyr to whom he showed his drawings, but to no avail. He also remembers that time when, during 3 days, after having been kicked out, he didn’t have a bed to sleep in at night, but, during the day, was serving bottles worth over a thousand euros. Recollection also of a first marriage, as short-lived as it was toxic. But he also recalls his first painting on canvas which he quickly sold…

Numerous periods and events during which drawing and painting either accompanied him or were set aside.

But the true catalyst in his life, as an artist, when Adrien decided to fully devote himself to it, was when his parents “repatriated” him to the Basque country, making him leave Paris (because they worried for their son). Thanks to which, at the age of 25, came the epilogue of Adrien’s artistic maturation followed by his blossoming.

Up until then, drawing and painting were a “daily ritual” (at the end of each day spent serving in that Parisian restaurant), without any genuine artistic intention. When he arrived in Saint Jean de Luz, creating became a choice, a desire. From that point on, his production began accelerating and evolving, becoming more intense. His first artworks were compulsive, an outlet, a way to appease his “anger” accumulated during his years spent in Paris, as Adrien puts it, with loose traits, impulsive and dark. Then, his artworks went on to be founding acts, with a genuine creative process, making way to color.

Consequently, his artworks…drawings on paper or acrylic paint on canvas…are exclusively male portraits. And of course, the “slap in the face” mentioned earlier from having discovered Buffet’s artworks, the clowns in particular, probably had something to do with it. Yet, Adrien Goudier replies “I don’t know » when asked « Why only portraits?”, “Why only men?”. “Who are these men ?”, Adrien, embarrassed, answers that he doesn’t know either, but that his gut feeling says that they are him, you, me, all of us…But, in the end, retain only the word “feeling” in his response, which in reality is “emotion”…

For a long time, Adrien’s stroke was automatic, rash, spontaneous, but always sincere because pure of any aesthetic intention. His artworks are created “in the moment”, in one take, without ever coming back to it. Their creation stops when his gestures are worn out, freed from emotion and longing. This is what makes them so intense and powerful.

Once he left Paris, the anger aforementioned diminished, leaving room for pleasure and the desire to paint. Time after which he discovered Love, a marriage, paternity and experienced two trying family events, leading Adrien to give himself to others : taking care of his dying mother, until she passed away after battling a lifelong disease, and taking care of his son who had to be treated for two congenital malformations. It is then that he began to share, to give of his time and of himself, and his drawing changed as well. He had matured, so had his stroke.

What was previously an outlet and compulsion, became a companion and a desire, a synonym of sharing.

Always guided by instinct and emotion, the stroke became more generous, rounder. And, even if his artworks are still made with just one stroke, Adrien spends more time on them…diving into his inner being, and winds up adding color, but not without fear : “I gazed at the canvas for a very long time before picking up the pallet knife and laying on the color…”. Shortly afterwards, his 3 « clowns » came to be, truly marking his blossoming, from our standpoint, but without, however, disavowing his previous artworks. But, thus was the conclusion of his life journey, which has led to other horizons.

More than an anecdote, an important detail  : each artwork is created by Adrien, after having chosen the glass of wine that will accompany him and the music he will immerse in. It is a ritual that came about back when he was sommelier at the Fouquet’s, when he would paint every night, after work. “It’s an inseparable association, a trinity : painting, wine and music”.

The adjective that best qualifies his artworks : melancholy, whose bitter sweetness he loves, and inspires his strokes. “Melancholy is the happiness of being sad” is a quote from Victor Hugo which Adrien loves and identifies with…

To be honest, we have followed Adrien’s evolution very closely, ever since he contacted Art Traffik and sparked our interest…We have followed and observed his production during a year’s time, and fell upon his clowns. Any doubts or prior hesitation evaporated when we saw his latest artworks, so we naturally offered him to join Art Traffik’s selection. We are as pleased to grant him his first slot in a gallery and the acknowledgement that goes with, as we are of presenting him to you. 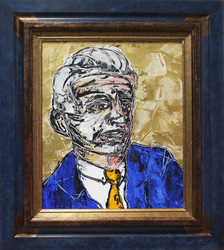 All artworks by Adrien Goudier