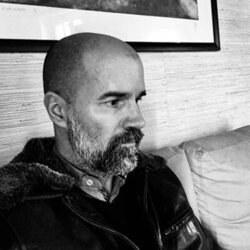 Through the window, I see autumn fleeing…I watch the bare trees swaying in the wind. I love this remote house which seems so small from afar…I also love seeing the silhouettes of strangers passing by in the street...

I could write for hours about the work and the artworks of Antoine, about his universe…

Every artwork having a topic on its own. Yet, they are of those which do not need “explaining”. I would even go as far as to say that keys for interpreting them MUSN’T be given. Not only do they speak for themselves, they also call upon the sensitivity, emotion, imagination and the personal history of everyone. A certain intimacy between the artwork and its spectator which must be left free of explanation or orientation, so that it may be fully expressed. Poetic ? Surely. Narrative ? Without a doubt. All with a certain technic and style, feeding from his universe, making Antoine Josse’s artworks clearly distinguishable.

But beyond the subject and style’s identity, the particularity of Antoine’s artworks that struck me is elsewhere…it is their capacity, depending on our mood and our state of mind, to either awake the child within us, with their dreamlike and imaginary quality, or to call upon our internal wisdom and adult philosophy which have been enriched by Life. Enthusiasts of  Antoine de Saint Exupery’s “The Little Prince”, which can be reread and rediscovered at any age, enriching us each time, will understand me and will be surely be moved by Antoine Josses’s artworks. Because, his artworks too speak of us, even if the subject matter is vegetal or animal, in which human beings are totally absent. And this by means of the alchemy obtained by combining the imaginary, a hint of foolishness and, at times, humor and childish naivety. An alchemy that our adult eyes decipher as lessons, meditations and philosophy, stemming from our own experiences, or, on the contrary, stemming from the child hidden deep within us, that is so delectable.

For both his sculptures and paintings, Antoine plays with light and shadow, black, gray or white, to highlight the subject. Color, which is always present, more or less dominantly, animates the artwork, and brings us back to reality or reminds of us of a dream. And, always with the same delicacy and elegance Antoine vests in his artworks.

He started out as a sculptor and began painting at a later time; painting which has since taken the upper hand, although Antoine still sculpts occasionally, depending on his mood. He alternates both, but is always inspired by the same universe and artistic intent. His love for matter can also be found in his paintings, using plaster-covered wood as a support. He gives the substrate particular textures and colors to enrich the natural and dreamlike quality of his paintings; background upon which he uses graphite for the black and acrylic for the colors. From this assemblage, and subtle aesthetic balance, a story, a dream, a message, or perhaps all three depending on the “interpretation”, come to light.

When looking at his older works, an evolution can be seen : the expansion of “void”. I would prefer to call this an improvement because it is this void that accentuates the elegance, the delicacy and accuracy of his artworks. Nihility, in painting, is a silence that makes us listen and be more attentive. In regards to Antoine’s artworks, it is listening to the delicacy of a whisper…narrating a story with very few words, and stirring us with the intonation and syntax mastered by Antoine. It is therefore of no surprise that the success of his artworks is steadily growing.

It can never be said enough : an Artist, written with a capital A by Art Traffik, is an artist who evolves, and reinvents him or herself, with humility and determination, to go further and higher, in order to reach his/her own desires and emotions. For these reasons, we are proud to introduce to you Antoine’s works, to be followed closely, especially since his original paintings are still very affordable. We also offer limited-edition prints, numbered and signed by the artist, that are even more affordable. At least, for the time being ;-) 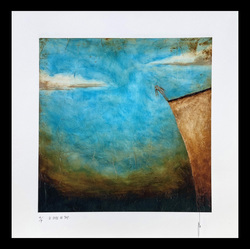 All artworks by Antoine Josse