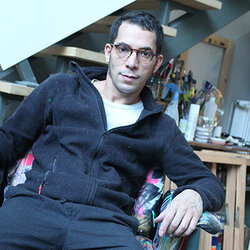 I search for freedom in my strokes, shapes and colors. I am not afraid of mistakes on my canvas, on the contrary, I look for them.

Lahcen Khedim’s artworks are as expansive and vibrant as their author is aloof and mysterious. But, just like his works, Lahcen is an independent and instinctive painter whose canvases reflect what seethes in him. He is first and foremost a painter without premeditation, for this reason, his works are based essentially on his stroke. Lahcen never ceases to work, paint, and draw; he changes and evolves with each passing day.

On canvas, the artworks of the “Crowd” series have an extremely rich content. The matter is disposed freehandedly, in curved and straight lines, using his “feeding bottles”, producing interlacing colors where faces and figures randomly appear, animated and connected by the lines. Through the color bursts, the expressionistic approach courts that of the abstract approach.

On paper, his series “Chaos & Tribe” represent organic matter. These large-format drawings, using mixed technics, are dense and compulsive. We see such expressive faces, as if whispered by a burning emotion; scraggly and twisted figures always embedded with symbols and codes, an imaginary alphabet similar to that of the hieroglyphs for which only Lahcen’s subconscious possesses the Rosetta Stone

In both cases, his work is inspired, intensified by the moment, dense in esthetic and visual exuberance. His paintings may evoke certain artists of the neo-expressionist movement or even certain graffiti artists. It is not a question of influence, just a consequence: Lahcen creates with the same spontaneity and urban spirit; he is interlinked with the modern world and retraces his vision of a chaotic and outlined world.

Lahcen Khedim’s universe ? A vision of mankind. His artworks act as distorting mirrors, of fairgrounds, that bring us back to who we are. He seems to say “Look at yourselves”. We are as the artists portrays us: human, universally human…With an invitation to search, within ourselves, for the childlike innocence and truth, beyond what life has led us to become.

Beware, Lahcen is one of the artists whose artworks you must rush to buy, while his prices are still affordable, for he is a hot topic and of great interest for galleries, experts and collectors. 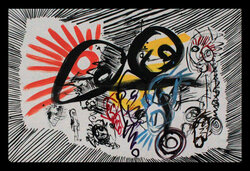 All artworks by Lahcen Khedim