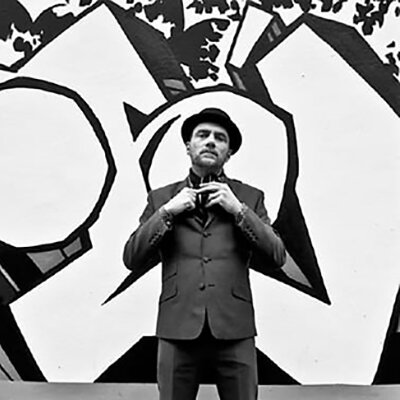 From the time when we were the first in France to paint on street walls, to the canvas of my workshop today: it’s the same combat for freedom of expression

RCF1 began to express himself using spray paint in the 80s, and is, therefore, one of the first French artists to import Street Art.

After having branded the streets, railroads and trucks around Paris, with tags, throw-ups and graffiti, he went on to develop, in the 90s, his own “logotype”: a ghost very similar to an exclamation point.

Although influenced by New York style graffiti (he interviewed Dondi, Phase II and Zephyr in 1992), RCF1 firmly inducted his Ghosts in the European wave of “picto-graffiti”. Free and radical, these “logotypes” became a full-blown style amongst street art, as did many other signatures. In the 90s, they flourished around the world and gave a critical view of graffiti as it was performed then, and ended up imposing itself as a fully-fledged movement

His group, P2B, distinguishes itself from other crews, with its deliberated avant-gardism. Each member has a unique approach to this cutting-edge practice (Popay, Honet, Stak, Poch…). In 2009, RCF1’s artworks were shown at the Cartier Foundation as part of the exhibition “Né dans la rue” while he was standing trial for tags on train wagons of the Gare du Nord. This situation single-handedly crystallized the differences among street artists: between the “tagging of walls” in pitch black nights and the formal lights of galleries.

Exposed in galleries since the 90s, RCF1 transformed his style towards numerous phases, integrating his style into a broader repertoire, strongly influenced by English subcultures and the history of art.

This allowed him to express himself as freely on canvas as he would in the streets, and gives him a place of honor amongst the artists who participated in the emergence of graffiti and contributed to graffiti being recognized as Art, in the eyes of galleries and collectors.

In 2011, RCF1 appeared in the artist catalog, representing France overseas alongside Jonone, L’Atlas and Speedy Graphito, and painted, on behalf of the Alliance Francaise, mural frescoes in Brazil, Tokyo and even Buenos Aires…

Today, he can be found in Paris or London, always perpetuating his artistic approach, between experimentation and tradition. Photography completes his artistic career, under the name of Jean Moderne. At Art Traffik, we are pleased to offer you his artworks from various periods: canvases with bright primary colors or painted and mounted photos, but also his more recent artworks in which the “Ghost” is showcased. An artist essential to any street art collection. 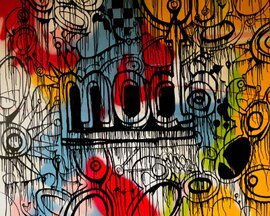 All artworks by RCF1