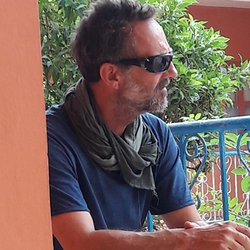 Art is useless but it heals all. I fed from it persistently until I myself started painting, while continuing my introspection.

I fell for MCF’s work, accidentally, for it was upon visiting his wife’s workshop (she too is an artist) that I discovered his artworks. Two of his paintings were hanging on the walls, and when I asked who was the author, drawn by what I was seeing, I learned that it was the fruit of her husband’s work. Two weeks later I was hanging his paintings in our exhibition space, along with his wife’s, to MCF’s great surprise.

MCF, the artist’s name, Nono for his closest friends, is one of those artists who doesn’t consider himself to be an artist…or at least, who didn’t used to think so. For he has continued to work his way, ever since I encouraged him, by exposing his works, for instance, among the other artists of our selection, offering him the recognition he never thought he deserved.

When asked « why do you paint ? » His direct and honest answer is : « My spouse spends a lot of time in her workshop. Time spent apart which I would occupy by watching TV. One day, I got fed up, and I purchased a canvas and paint, and I joined her in her workshop.  I loved it ! This first painting monopolized me, mentally, to a point that I spent all my time on it, including nights, until it was completed. Before, I used to say that painting wasn’t for me. Now, it’s all I can think about. »

Self-taught artist ? Totally ! And yet…the results are there, probably because, and as he says, « I paint more with my guts than I do with my fingers. »

Does this mean he paints impulsively, spontaneously ? On the contrary. MCF first thinks out his artworks; he puts them on paper before producing them on canvas. Each brush stroke is assessed, envisioned, and before completing an artwork, many will have been thrown away or several will be recovered. All because he’ll have the image of the final outcome in mind and he won’t be satisfied until it’s attained. At times, he’ll start a painting and will hold the thread, but he’ll cover it up because of a missing shape or color, of the puzzle.

MCF isn’t an artist « who has been painting since he was a child ». However, he has always fed off of art.  Glutton of art exhibits, fairs, art books and documentaries, MCF loves to see art, whether it be classical, modern or contemporary; from Vermeer to Basquiat, he studies it all…not for his culture nor to be an expert, but because he LOVES what paintings convey : emotion. To the point of « being flabbergasted, as with music; art can give me goosebumps. » This is how he has imbued himself with art, always asking himself what emotion is conveyed by the artwork and curious of the technic used. So, naturally, he began painting himself, with humility and sincerity and…uncertainty. « When I paint, a door opens onto a hallway that is filled with many other doors ».

For which there is no doubt, the subject matter…the artworks from his first series (black lines on a white background with yellow, red and blue spots, which bring to mind the works of Mondrian) were the outcome of a news story that struck him (« A hold up at the Banque de France gone wrong ») or from a memorable recollection (« Caroline said yes ») or a story from his daily routine (« Caroline got new glasses »). However, he does not impose a story, his story. « It isn’t mandatory to have a direct message : the painting should leave way to the imagination », and, unless you read the title, his artwork will be interpreted freely by the person looking at it. What will you see in the solid line whose curves may evoke characters, animals, objects ? That is, if you wish to « read » them, for their aesthetics alone suffice without having to understand a message, a story.

And if MCF creates his artworks with a certain logic in the series, every last one is quite different from the others, at first glance. Yet, they are all bonded with the same DNA. Firstly, the colors, a « topic » for MCF, if not an « issue », which he analyzes and chooses meticulously. Then, there’s the dichotomy, between the harmony sought in the colors and the irregularity, chaos even, of the lines, the perspective, the stroke. It is this paradox that MCF explores and that his paintings will continue to explore, for that is his intention : paint to explore and delve into himself through painting. « There are 50 million universes in addition to those to be invented. I want to explore, and since I got a late start…I’m like a mad dog staring at all the possibilities ».

Artist presented and exhibited for the first time, therefore, at very affordable prices. Perfect for that crush, and whose progression should be followed closely ! 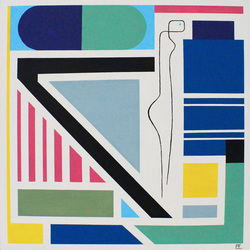 All artworks by MCF