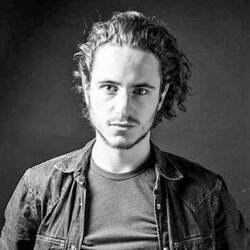 I keep my mind and my heart as opened as my eyes.

Although a young French photographer, Mikael Theimer set his suitcases and his sights in Montreal. He has developed a true passion for this city and its inhabitants, and even created the “Portraits of Montreal” blog, inspired by the famous “Humans of New York”, which has since given the eponymous book.

Mikael loves people…for their sweetness, their love, which are touching, surprising or off-beat, but always humane. He watches them in their urban environment to capture, with on the spot aestheticism, those precious moments that make him love people.

It is this love he wishes to share with us. You’ll will never see him without his camera, always ready to capture those unique and real moments. Consequently, his themes emerge from his wandering through the city and the world. Here, woman curling up in the arms of a man: : the series “Street Love” came about and is continuously expanding.

Here, his girlfriend hiding her face in front of the lens, always refusing to be the subject matter: the photographer has made it a personal quest. Hence begins « Mama does not like the camera » filled with many “missed” shots, incapable of capturing his girlfriend’s endeared stare, creating a strong day to day identity, in which each picture is like a page in a diary, and about playfulness. In the era of selfies, this series defies narcissism and brings praise to complicity. For each picture, Mikael likes to narrate a story, just as he does in the texts he writes which accompany his artworks. And for every series, he develops and reveals a theme, both literally and figuratively.

Exclusively at Art Traffik, the “Star” series. Photographs taken during different public visual art events or during repetitions, each putting the dancer and the movements at the core of the picture. The framing is graphical for a dreamlike outcome, poetic at times, with the contrast enhancing the movements. Regarding this series, he writes : « Circus artists have the power to communicate their childlike spirits to the spectators looking on.” Perhaps they never really lost that spirit from doing somersaults. George Bernard Shaw once wrote “ We do not stop playing because we get old; we get old because we stop playing.” This series is somewhat of a tribute to this reflection and to those who have made it their lifestyle, to remind us to always stay young. As he says “In the end, it isn’t so much photography that I love, as it is the subjects I photograph. The people my camera allows me to meet, the places it takes me to, the stories it unravels; all the windows it opens to the world.”

Having developed a true passion for humanistic photography, it isn’t surprising to know that Mikael Theimer often works alongside NGOs, documenting their missions for exhibitions. 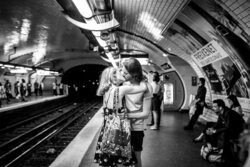 All artworks by Mikaël Theimer